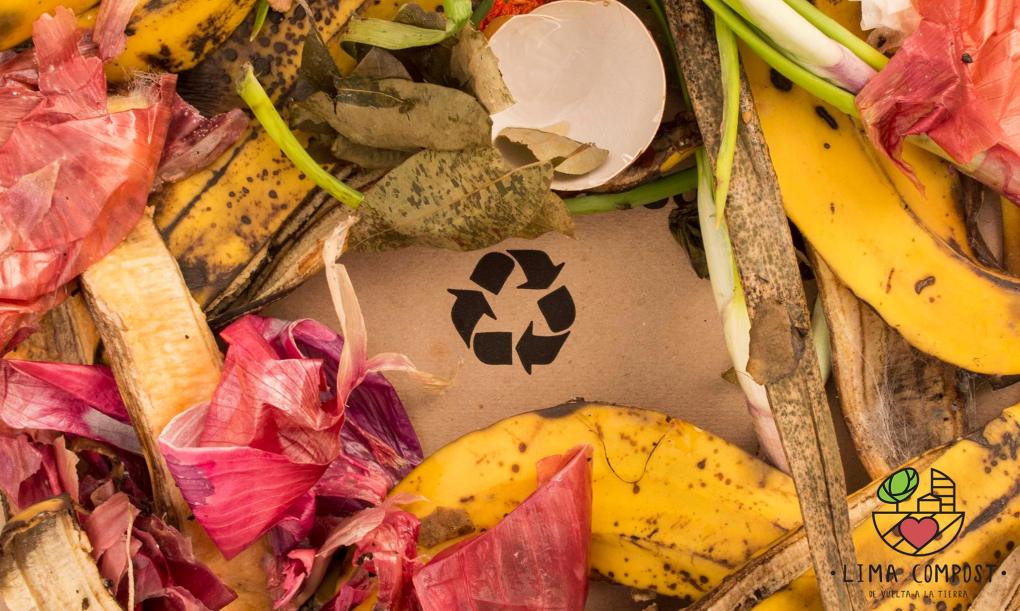 Early in 2018, Peruvians expressed that the central issue damaging our country was corruption. As the World Economic Forum validates, bribery can be fatal for emerging economies.

Our former presidents are an example of the corruption in our country. Alberto Fujimori is fulfilling house-arrest after ten years in jail. Ollanta Humala is facing a trial after he and his wife spent nine months in prison. Alejandro Toledo has stayed in the USA to avoid arrest. Our last president, Pedro Pablo Kuczynski, had to step down due to unethical scandals and he is now facing justice trials.

These circumstances weaken political leadership which may affect the continuation of various policies, including environmental. In 2017, when a new regulation for solid management was being promulgated, the Congress questioned the credibility of president Kuczynski’s government. This resulted in his resignation in 2018, and a new environment minister had to be appointed. Corruption also affects in more direct ways, such as mayor Villanueva, from the district of Villa Maria del Triunfo, who was arrested in December 2017 for being the head of a criminal gang. The legacy of his management was enormous amounts of garbage in the streets and a massive debt to the companies in charge of handling waste.

The nearly nine million residents in Lima, Peru’s capital city, produce more than 8,000 tons of trash per day. Poor city waste management has led to the city’s abundance of rubbish on the streets, as well as in landfills near the most impoverished neighborhoods. Lima’s garbage issues impact air and water quality, and therefore citizens’ health. Moreover, organic waste generates methane that will influence climate change. Lima generates over 8,500 tons of waste per day. Half of this is organic and can be composted.

In May 2015, we started Lima Compost, a small business that empowers families with products and services to transform their everyday organic waste, which is 50% of their trash, into manure that we call compost. This two-month process that takes place inside houses and apartments is what we call indoor-composting, and can mitigate the impact of climate change.

Although composting families can use their compost as a fertilizer for their garden and flower pots, the majority of them have in excess. That’s why since we started a project in the urban slum “Eliseo Collazos” at the “Puente Piedra” district, in Lima, Peru. There we will improve the gardening skills of twenty families, who live here so that they can grow quality crops and provide for themselves. In this way, these families will save money as they won’t need to buy vegetables from the market. Lima Compost and the NGO Louisville Grows (Louisville, Kentucky) will do the training with funds from the U.S. State Department funds the project. 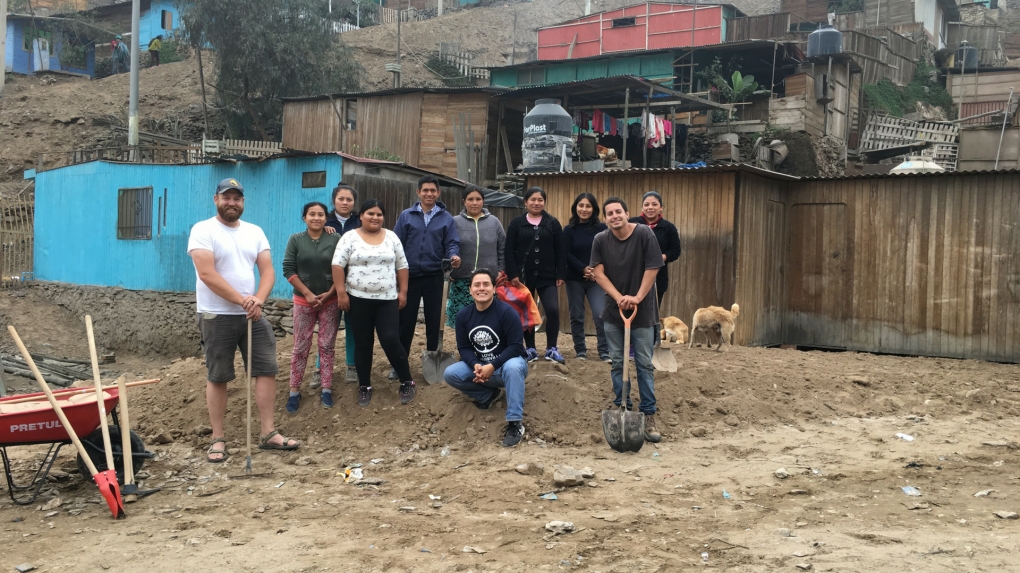 In the white t-shirt, Ked Stanfield from Louisville Grows (Kentucky, USA). On this day, we brought farm soil to start the edible garden. After a trailer delivered to the ground, the families leverage the land. 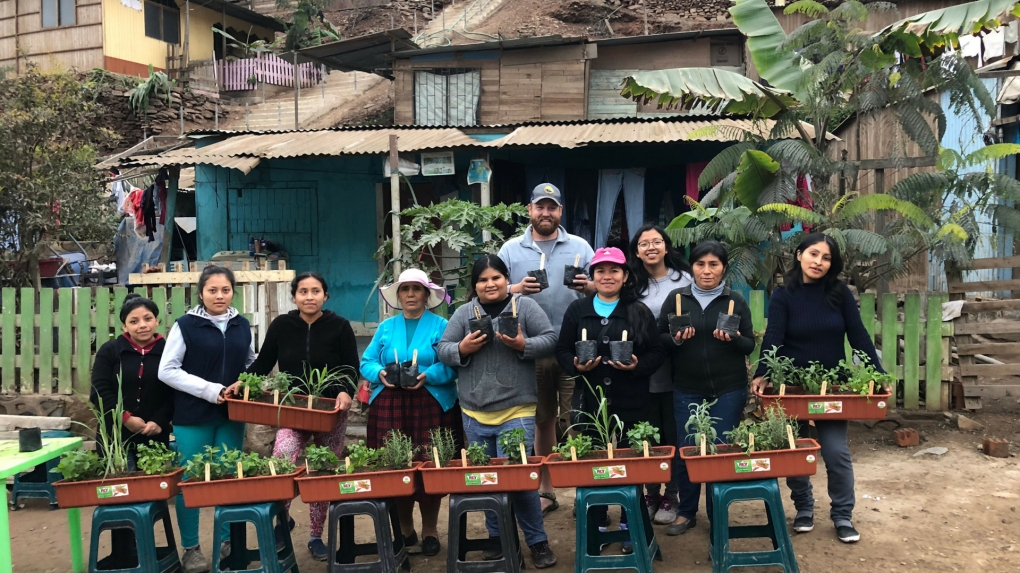 On that day, Ked Stanfield, in the middle, taught how to raise edible plants.

Currently, nearly 1,100 families are composting with us. From 2017 to 2018, they will have composted up to 0.0074% of Lima’s total organic waste. By 2021, we aim to have 20,000 families doing indoor-composting to raise that number to 0.1351%. So, can indoor-composting fix the trash issue in Lima? Unfortunately, no. However, the impact of waste in Lima and the growing community of families demanding composting alternatives has pushed the government to start composting initiatives with local districts. Also, this has brought us new consumers like schools and companies, and even the municipalities. Lastly, despite being a small business, our work has appeared in media, a fact that made the Ministry of Environment invited us to participate in the National Organic Waste Committee. So, although we may not solve the trash issue in Lima just by doing indoor-composting, we are starting a revolution where empowered families can compost, with or without the help of the government. The most important question will be, will we solve the trash problem in our cities soon enough? 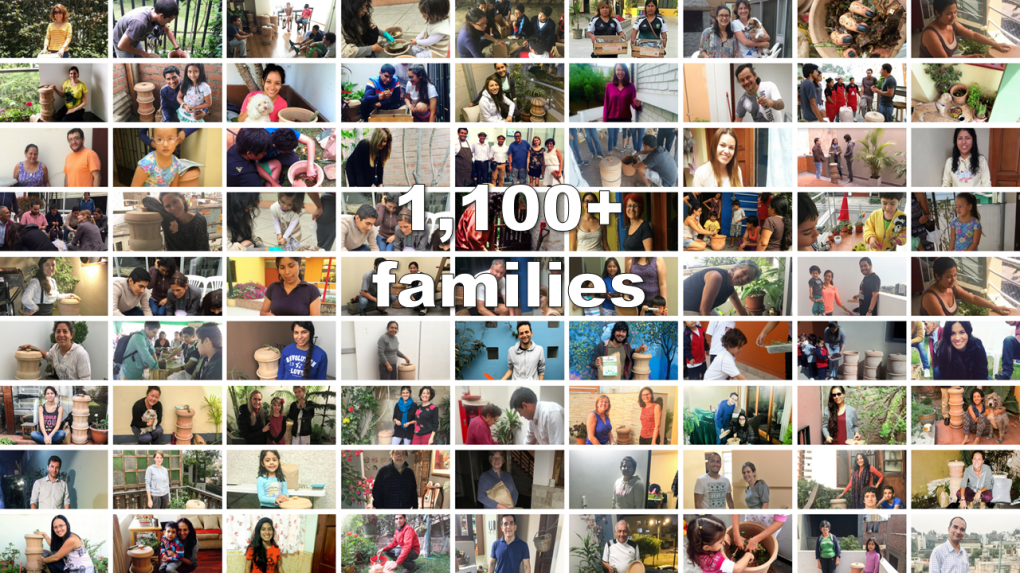 More than 1,100 families are composting with our clay composters and technique.